Local area guide to the South Benfleet area, near Southend on Sea 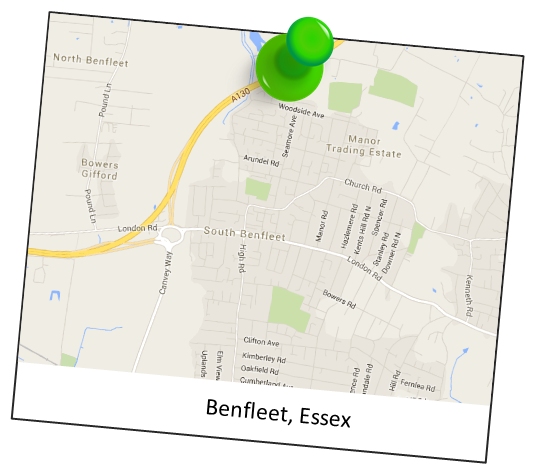 As a Lettings Agency in Southend, our clients often ask us about local amenities in popular local neighbourhoods. Therefore, we’ve put together the following information which we hope will give you a feel for the popular area of Benfleet.

South Benfleet is a small town, located 30 miles east of London and 10 miles west of Southend-on-Sea, with a population of around 50,000 people. It sits within the local government area of Castle Point along with Thundersley, Hadleigh and Canvey island.

Like many other small towns in the area, Benfleet has a rich and vibrant history. It was used as a Viking base until defeat by the Saxons at the Battle of Benfleet in 893AD. Subsequently a church was built by the Saxons to give thanks for the victory and now St Mary’s church occupies this site.

The name of the town originates from the time of the Saxon settlers in the 5th Century, when the area was largely marshland. They named the area Beamfleote, meaning “tree stream”, being the area where the creeks from the River Thamas adjoined the wooded area to the north. The current spelling was adopted at the time the railway service was brought to the area and a railway station built for the town.

Benfleet is also home to a variety of sports clubs including South Benfleet Bowling Club, a local running club catering for beginners through to more experiences athletes, Boyce Hill Golf club and also a number of football and cricket clubs for both adults and children.

For nature lovers, the RSPB site, Bowers Marsh, is an ancient landscape alive with the sights and sounds of wildlife situated between Benfleet and Pitsea. This grazing marsh has played a vital role in the lives of people and wildlife for centuries. Now, after careful restoration, there are 4 miles (6 km) of nature trails to explore on foot, three viewing points and two picnic areas.

London is easily accessible by train directly from South Benfleet with routes in to both Fenchurch and Liverpool Street stations. Journey times are approximately 45 minutes with trains running every 15 minutes and more frequently during the rush hour. Train services are provided by C2C and current timetables can be downloaded here.

Benfleet also has good bus links to both Southend and the surrounding areas, with popular services including Arriva Southend’s route 1 service which runs between Rayleigh and Shoeburyness, and First Essex’s route number 21 service which runs from Southend to Canvey. For information about routes and fares visit the Benfleet Buses Website or Firstgroup Website. There is also a limited stop coach service to and from Stansted Airport and regular services to Southend University Hospital.

Within South Benfleet, admissions to both primary and secondary schools are managed by Essex County Council. Families with young children choosing to live in the area have a good choice of state infant, junior schools and day nurseries, including South Benfleet Primary School, Montgomerie Primary School and Kingston Primary which has been awarded ‘teaching school’ status, entitling Kingston School to lead the training and professional development for the local area.

For older children requiring secondary education, there is The Appleton School, a mixed school with a business and commerce specialism. There is also the Seevic / UPS College for sixth from and further education courses offering a wide range of A-level and vocational courses.

The Southend University Hospital is the main hospital for the area and has an Accident & Emergency Department. The following link will take you to the ‘Find Us’ page.

For non-emergency care, The NHS website offers a search facility which will return a comprehensive listing of all local GP surgeries and health centres including;

To find out which day your refuse and recycling will be collected in South Benfleet, please visit the Castlepoint Borough Council website for full details. There is also a downloadable calendar which details of collections by type and date.

There are several pubs and restaurants in the area, particularly noteworthy are those located in the Monument and St Mary’s area of the town including The Anchor, “The Hoy and Helmet” and the Half Crown. There are also a range of restaurants in the South Benfleet conservation area and the Maharaja Restaurant on London Road is the largest Indian restaurant in Essex!

There are a number of local shops in Benfleet including local convenience stores, dry cleaners, take way food outlets, hair and beauty salons as well as banks with cashpoints. However, for a greater choice, there are also larger shopping centres in nearby Southend and Basildon, as well as a number of retail parks on the outskirts of the towns.

Thinking of buying in Benfleet?

If you’re thinking of buying a property in or around Benfleet, why not give Pace a call?