Local area guide to the Canvey Island area, near Southend on Sea 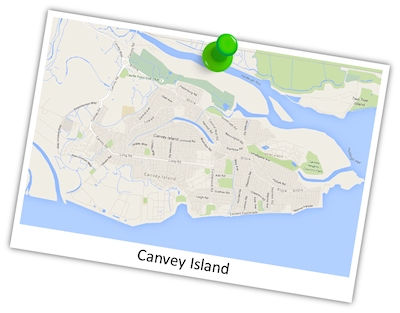 As a Lettings Agency in Southend, our clients often ask us about local amenities in popular local neighbourhoods. Therefore, we’ve put together the following information which we hope will give you a feel for the popular area of Canvey Island.

Canvey Island lies off the south coast of Essex 30 miles (48 km) east of London, and 15 miles (24 km) west of Southend-on-Sea. The island is separated from the mainland to the north and west by Benfleet, East Haven and Vange creeks, and faces the Thames Estuary to the east and south. The Island is currently home to approximately 38,000 people across its 7.2 square mile area. It sits within the local government area of Castle Point along with Thundersley, Hadleigh and Benfleet.

During the Victorian era Canvey became a very fashionable place to visit, and its air was promoted as having healing properties. This started in 1899, after the Black Monday floods, when an entrepreneur called Frederick Hester bought Leigh Beck Farm, and started what was to be called Southview Park estate. The properties sold very quickly so Frederick bought more plots of land, selling them as dream homes for London’s EastEnders. Hester wanted to create Canvey as a great seaside resort for Londoners, and so built the first promenade, a pier and a magnificent winter garden & palace, of which he planned to cover six miles (but only covered a mile), as well as a mono rail system (initially horse drawn then later electric) Hester marketed Canvey as Ye Old Dutch Island giving many of the new roads Dutch sounding names, and enticing potential buyers with free rail tickets. The project started well with thousands of plots sold, however by 1905 the scheme had fallen apart due to materials not being delivered and issues with land ownership with the laying of the mono rail. Hester was declared bankrupt and everything was sold off at an auction held at Chimney’s Farm.

A new sea front was developed in the 1930s, with Canvey Casino – an amusement arcade and park opening as the first building on what would become Eastern Esplanade Since then further amusements, a cinema, the pioneering Labworth Café, the Monico pub and nightclubs such as the Goldmine were built. Canvey Island remained a popular holiday and weekend destination until the cheap foreign package holiday became popular in the 1970s.

During the Second World War the island was a part of the GHQ Line, a line of concrete pillboxes constructed as a part of the defence against the expected German invasion. Some of the old pillboxes are still in place. Also, concrete barges were used extensively just off the south coast of the island, partly as a sea-barrier and also as a mounting point for anti-aircraft guns; one of which was beached on the east end of the island and remained for many years as a point of interest for visitors and a play area for many generations of the island’s children.

Developments in the 20th century have produced a marked contrast between the environments in the east and west of the island. The eastern half of the island is allocated to residential areas, the main public amenities and a small holiday camp and seafront, while the western half of the island is mainly farmland, marshes and industrial areas. The marshes in the west include the 30 hectares known as West Canvey marshes, acquired by the RSPB in 2007 and the Canvey Wick nature reserve. Canvey Wick is a designated Site of Special Scientific Interest (SSSI) at the site of the abandoned and incomplete oil refinery. The foundations of the 100 hectare (0.4 sq mile) site were prepared in the 1970s by laying thousands of tonnes of silt dredged from the Thames; the abandoned and undisturbed area has flourished as a haven for around 1,300 species of wildlife, many of which are endangered or were thought to be extinct; including the shrill carder bee, the emerald damselfly and the weevil hunting wasp.

Canvey Island has two senior semi-professional football teams in Canvey Island F.C. (the Gulls) and Concord Rangers F.C. Amateur participation in sport is popular on the island, with sports such as rugby union, cricket, and martial arts represented by clubs and corresponding facilities. The Castle Point Golf Course is situated on Canvey, and the Waterside Farm Sports Centre (refurbished in 2013) provides members of Castle Point district with access to a swimming pool, an athletics track, general purpose sports halls, and a full size artificial surface football pitch. Also home to Canvey Island Swimming Club providing coaching for children ages 4 and upwards from beginners to competitive swimming through to National standard.

Water sports are also popular recreational pursuits. Canvey has two sailing clubs in The Island Yacht Club and the Chapman Sands Sailing Club, with Benfleet Yacht Club and slipway also situated on the island at Benfleet Creek in the north. A region between Thorney bay and Labworth beach is designated by the Port of London Authority as an approved windsurfing area. The Canvey Island Swimming Club provides lessons and training and is based at Waterside Farm Leisure Centre.

Canvey Island is connected to the mainland in the northwest by two roads with bridges: The A130 (Canvey Way) and the B1014 (Canvey Road). Built in 1972, the A130 (Canvey Way) crosses East Haven Creek to Bowers Gifford and joins the London-Southend A13 at Sadler’s Farm Roundabout. The two lanes of the A130 are currently the island’s primary access route with 25,000 vehicles using the road and bridge per day.

Canvey Bridge crosses Benfleet Creek to South Benfleet, and provides access to the c2c London (Fenchurch Street) to Shoeburyness line via Benfleet railway station. Journey times are approximately 45 minutes with trains running every 15 minutes and more frequently during the rush hour. Train services to Canvey Island are provided by C2C and current timetables can be downloaded here;

The current bus services on the island are operated by First Essex from the Hadleigh bus depot, and Regal Busways based in Chelmsford. First Essex is the main operator providing the island’s internal services via the town centre, and provides services to the nearby towns of Southend-on-Sea and Basildon. Regal Busways began services on the island in May 2006, and operates the primary (1 and 1A) service to Chelmsford and services via South Benfleet, Battlesbridge, Howe Green and Sandon and occasionally beyond Chelmsford to Writtle.

Canvey Island has two comprehensive schools: The Cornelius Vermuyden School and Castle View School. Both were built in 2012 as replacements for the island’s three ageing comprehensives, and as a response to the island’s decreasing numbers of 11- to 16-year-olds.

Cornelius Vermuyden school occupies the same site as its predecessor near Waterside Farm, while Castle View School – within the town centre and centre of the island – has replaced Furtherwick Park School, having previously existed within the island’s north/central Winter Gardens Ward, overlooked by Hadleigh Castle. Furtherwick Park School shut in 2010, remaining students we’re then moved to Castle View School to finish their education. This site is now the location of Canvey Skills Campus which was built in 2013 and provides vocational education for 14- to 19-year-olds, and adult learning.

The Southend University Hospital is the main hospital for the area and has an Accident & Emergency Department.

For non-emergency care, The NHS website offers a search facility which will return a comprehensive listing of all local GP surgeries and health centres including;

To find out which day your refuse and recycling will be collected on Canvey island, please visit the Castlepoint Borough Council website for full details. There is also a < ahref=”https://www.castlepoint.gov.uk/recycling”>downloadable calendar which details of collections by type and date.

Canvey Island has several shopping areas. The main town centre known by older locals as the Haystack (after a local pub) is based around Furtherwick Road and the High Street. Most shops are located either in the Knightswick Centre (opened 1978) and Furtherwick Road with the lead store being a Sainsbury’s supermarket.

There are a number of small shopping parades in St Michael’s Road, The village and Jones Corner on Long Road as well as several independent shops along the High Street.

Castle Point Council is currently planning a £50m regeneration scheme for the town centre including building a larger supermarket on the current Knightswick Car Park and better connection to the town centre and the lake.

Thinking of buying in Canvey Island?

If you’re thinking of buying a property in or around Canvey Island, why not give Pace a call?