David’s Dream – The City of Southend

The City of Southend

We’re supporting Southend as a city!

Following the shocking death of Sir David Amess in October 2021, the Prime Minister announced on 18 October that Southend-on-Sea would be awarded city status in his honour. But what does it mean to be a city and how will this elevated status help our town?

What makes a city?

Contrary to popular belief, not every city has a spectacular cathedral that dominates the skyline: it’s true that many cities do boast architectural masterpieces but it’s not actually a prerequisite. This is because historically, cities were settlements with a cathedral and those places still remain cities today, irrespective of population size. Therefore, many settlements that are now comparatively small, such as Ely, (population 20,100 in 2011), Wells, (12,000 in 2018) or Salisbury (40,300 in 2011) have long had city status. Compare this with Southend’s core population of around 183,000.

Neither is physical size by area important; for example, England’s smallest ciy is ‘The City of London’ and is only a little over 1 square mile. England’s largest City? Perhaps it might be Greater Manchester, or how about Birmingham? Not even close – that title belongs to ‘The City of Carlisle’ at a whopping 401 square miles!

So, what makes a city today? Obviously, a cathedral is frequently a common factor, but so is having a university, thriving business community and a large population. Many factors play a part in building the case for city status.

However, local government structures, despite often being called ‘city councils’, do not have a direct connection to whether somewhere has the status of a city. In law, a city council could be a unitary authority like Manchester, a district council such as Cambridge or even small parish council as seen in Truro.

How do towns become cities?

If we look back to the 16th century, reigning monarch Henry VIII dissolved the monasteries and founded six Anglican dioceses with the proceeds. As a result, half a dozen towns became cities by virtue of their being diocesan centres.

When new dioceses were created in the 19th century, their centres were located in towns which had an appropriate parish church which could be consecrated as a cathedral, such as Manchester. This is why most people’s understanding of how a place becomes a city still relates to it having a cathedral.

Whilst grounded in truth, becoming a city by virtue of a cathedral, is an urban myth. The link was broken in 1889, when a charter was conferred on Birmingham as a result of its size and importance.

In recent decades, city status has been granted through a series of competitive bids, managed by the Ministry of Housing, Communities and Local Government. As part of the celebrations planned for the Queen’s Platinum Jubilee next year, in June of this year the Government announced a competition for civic honours. Applicants can seek city status, or a Lord Mayoralty and Sir David Amess had already announced his intention to apply for city status for Southend.  The only guidelines for local government officers preparing the applications are that they need to emphasise civic pride, heritage, innovation and opportunity, something Sir David had always championed for Southend.

The core area of Southend on Sea extends from Leigh on Sea on it’s western fringe to the Ministry of Defence ranges at Shoeburyness, to the East; the northern boundary terminates through Southend Airport. 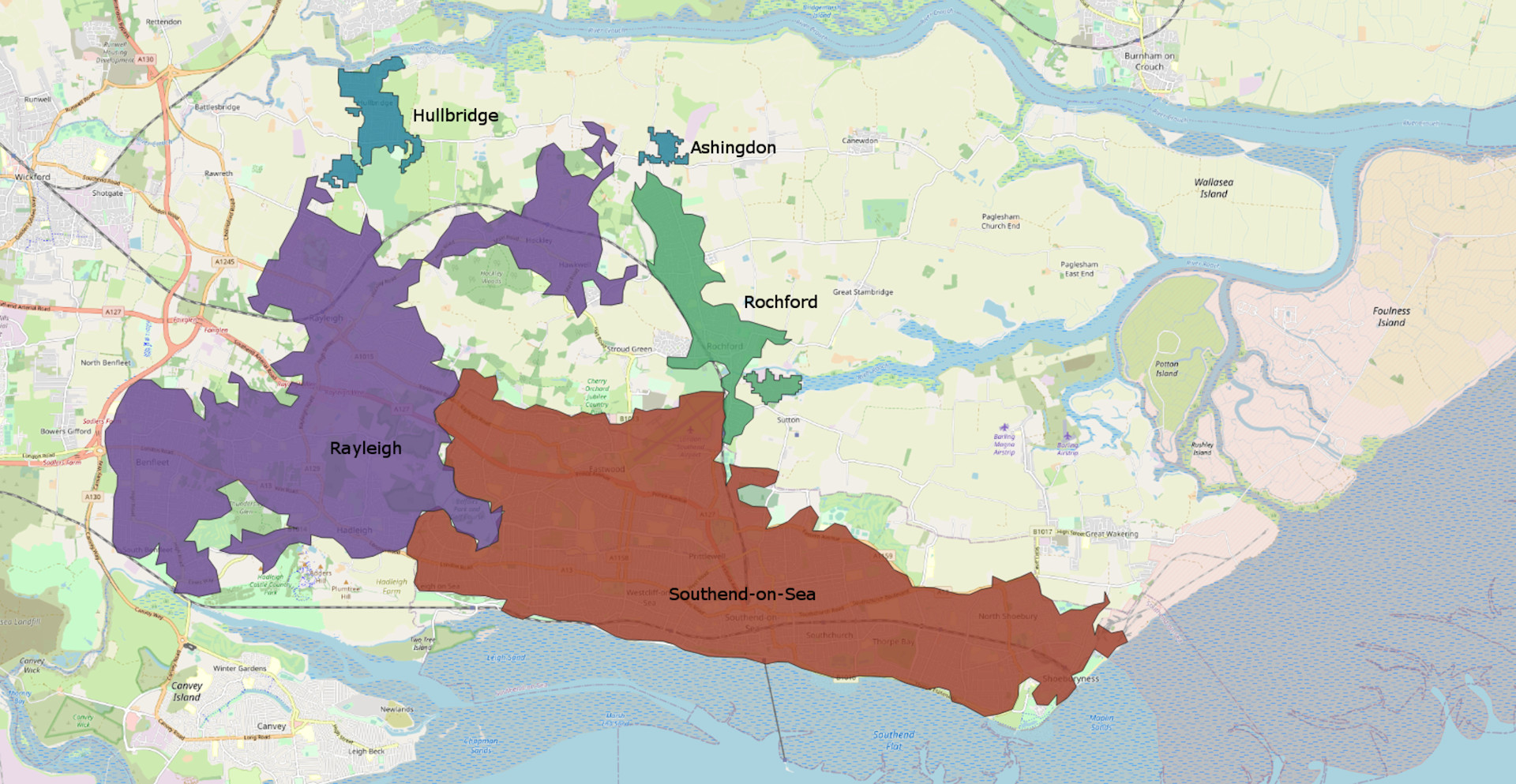 The wider urban area of Southend spills outside of the core borough boundary into the neighbouring districts of Castle Point and Rochford, which includes the towns of Hadleigh, Benfleet, Rayleigh and Rochford itself, as well as the village of Hockley. The 2011 census recorded a population of 295,310 for this wider area, making it the largest urban area solely within the East of England!

What benefits are associated with becoming a city?

Being a city does not bring tax breaks or financial benefits, but it is generally held to benefit the citizens of those places which are successful in the competitions. Previous winners have emphasised the benefits the status has brought. Stephen Parkinson, who led Preston’s successful bid in 2002, argued that it served to put his town on the map.

“We have joined an elite club,” Parkinson said. “You are recognised internationally and nationally as a place that means business.”

The death of Sir David Amess led the Prime Minister to announce that the Queen had agreed Southend-on-Sea would be awarded city status in his honour. Whilst this is truly positive news for our town, there is an underlying note of sadness that Sir David is no longer with us to see his dream become a reality and lead the celebrations.

Seeing Southend acquire this new label had long been Sir David Amess’s goal. As he put it in the House of Commons in 2019, “I know that the House has become tired of hearing me ask for city status for Southend … but I am not going to shut up until it happens.”

What happens next for Southend to become a city?

Her Majesty The Queen will become the first British Monarch to celebrate a Platinum Jubilee next year, after seventy years of service. As part of the jubilee clebrations in being held in June 2022, The Queen will issue ‘Letters Patent’ granting city status to Southend. At that point Southend will then become England’s 52nd city, and the second in Essex behind Chelmsford.

We are all aware how long and hard Sir David Amess had campaigned for our town to be recognised and we can’t think of a better way to honour his memory.